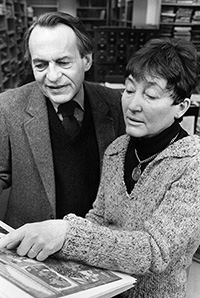 In the summer of 1956, Lloyd and Susanne Rudolph embarked on a 5,000-mile overland journey from London to Jaipur, India. The Rudolphs had just finished their PhDs and, with funding from the Ford Foundation, were setting out to field surveys about political life across the subcontinent. Armed with the most sophisticated theoretical and methodological training of their time, they had designed a study that would reveal the true underpinnings of Indian democracy. What the Rudolphs discovered in the field confounded their expectations and revealed fundamental incompatibilities between the logic of surveys and how local citizens actually experienced politics. This fieldwork changed the course of their careers, eventually producing iconic critiques of imperial categories like modernity and tradition and reflections on fieldwork that are still widely read today.

Lloyd and Susanne joined the University of Chicago in 1964 and spent the next 40 years teaching, mentoring, and serving here. Proponents of what they called ‘situated knowledge,’ they vigorously advocated for social science research that proceeded from local specificities – gathered through fieldwork – upward to comparative generalizations. Together, the Rudolphs served on the dissertation committees of approximately 300 students, directed programs like the Center for International Studies and the Committee on International Relations, and were tireless champions of fieldwork opportunities for students at the University.

This year, in honor of the Rudolphs, the Center for International Social Science Research (CISSR) founded a new initiative: The Lloyd and Suzanne Rudolph Field Research Awards for Graduate Students. Reflecting the Rudolphs’ devotion to fieldwork and to local, situated knowledge, these awards will support field and archival research projects of graduate students from across the Division of the Social Sciences. With support from this new award, eleven students will embark on their own research journeys. We congratulate the recipients, wish them well on their respective fieldwork journeys, and look forward to sharing news about the fruits of their labor in the coming months.

Adam Almqvist is a fourth year PhD student in the Department of Political Science. He earned a BA from the School of Oriental and African Studies in London, UK, and an MA in Middle Eastern Studies and Arabic from Lund University in Sweden. He has previously conducted research on contemporary Syrian political development and on the political economy of urban planning in post-Nasser Egypt. Almqvist's dissertation research examines neoliberalism and the governance of youth in contemporary Arab countries.

Emma Gilheany is a PhD student in the Department of Anthropology at the University of Chicago. She is an archaeological anthropologist who explores how the material record can be used to re-theorize settler colonialism in North America. Her current research examines ecological histories, indigenous resistance, and religious/scientific experimentation in Arctic and Subarctic landscapes. She is particularly interested in the ways that archaeological epistemologies can intersect with and serve Inuit sovereignty initiatives.

Isaac Hock is a PhD student in Political Science. His research focuses on urban violence, crime and economic development in sub-Saharan Africa. He is a graduate of Swarthmore College.

Cameron Hu is a doctoral candidate in anthropology at the University of Chicago. His research explores the political-economic and techno-scientific logics that shape the global frontier in "unconventional" oil extraction.

Mishal Khan is a PhD candidate in the sociology department, focusing on historical sociology, colonial law, and slavery in South Asia. Her current project on abolition and its impacts on labor relations in India, builds on a long-standing interest in contextualizing current processes of marginalization in South Asia within historical antecedents in the colonial era. With a background in human rights and international studies, Mishal has worked in social policy organizations and think tanks in Pakistan, focusing on contemporary issues of poverty alleviation and identity based social exclusion. Earlier iterations of this project have been generously funded by the Pozen Family Center for Human Rights, as well as the Committee on Southern Asian Studies.

Yujie Li is a PhD student in History Department at the University of Chicago whose work focuses on the twentieth-century China. Her research interests include history of material culture, history of technology, and history of work and life under Socialism. Yujie completed her Master in Social Sciences in the University of Chicago and her Master in Arts Administration in Columbia University. Before her study in the United States, Yujie worked in arts and media in Beijing.

Steven Schwartz is PhD Student in the Department of Anthropology at the University of Chicago. His research interests include energy, political ecology, development, value and indigeneity in Latin America. He was born and raised in Venezuela, where he completed a BA at the Universidad Central de Venezuela in Caracas. He has carried out ethnographic fieldwork in Venezuela and Colombia since 2011.

Alex Shams is a Ph.D. student of Sociocultural Anthropology whose scholarship focuses on religious culture and politics in the contemporary Middle East. He previously worked as a journalist based in Palestine.

Raffaella Taylor-Seymour is a UK-US Fulbright Scholar and PhD Candidate in the Departments of Anthropology and Comparative Human Development at the University of Chicago. Her research examines the politics of fertility, sexuality, and ancestry in Pentecostal communities in contemporary Zimbabwe. She received her undergraduate degree in Archaeology & Anthropology from King’s College, University of Cambridge, and received the inaugural Diamond Family Foundation-Fulbright Award for research in Africa. Her research has been funded by the Committee on African Studies and the Pozen Family Center for Human rights at the University of Chicago.

Emily Webster is a third-year PhD Candidate in the Department of History, studying the Environmental History of the British Empire. Her current project, "Diseased Landscapes: Land Use Change and Emerging Epidemics in the British Empire, 1840-1915," focuses on the relationship between urban land use change and the emergence of epidemic diseases in British colonial contexts. Her historical interests include disease, environment, urban structure, empire, and the Anthropocene.