As nativism makes a resurgence in global politics, why has the ruling Hindu Nationalist BJP in India looked to its global diaspora (particularly in the West) for resources in its national projects? Most scholarship assesses the rise of the Indian Right and support for Hindu nationalism in its domestic context as, in part, tied to the emergence of the new middle class in India. However, less has been said in a systematic fashion about the ways that the Indian diaspora has played a role in this process.  In this project, I examine how the Indian diaspora and the Indian state have re-oriented to each other in a way that’s fundamentally reshaped the Indian political field. In particular, I study how Indian-American immigrants and their children become diasporic citizens; that is, how they are socialized into understanding themselves not just as immigrants and the children of immigrants, but as directly and institutionally tied to an imagined homeland, which in turn provides them liminal political and social enfranchisement. Ultimately, this project examines these novel forms of governance and citizenship in the contemporary global order to shed light on how globalization has paradoxically allowed for new strategies and technologies of nationalism. 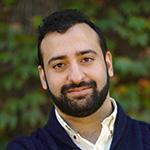 Nisarg Mehta is a doctoral student in the Department of Sociology at the University of Chicago.  Using ethnographic and archival methods, his research broadly explores the intersection between culture and politics. His current project considers the relationship between diaspora and statecraft, examining how the ruling Hindu Nationalist BJP in India and the global Indian diaspora have increasingly oriented toward each other, reshaping the terrain of Indian politics. His previous work focused on the effects of urban governance decisions like place commemoration on the urban spatial imaginary, and how these governance projects shape people’s relationship to their neighborhoods and their behavior within them.