During the two decades after the end of the Cold War, the U.S. promoted and sponsored Latin America’s deepest criminal reform transformation. By the end of 2010, approximately seventy percent of Latin American countries had abandoned their inquisitorial system and adopted the U.S. adversarial model. In the era of mass incarceration, the U.S. decided to expand its criminal justice model without considering the potential negative consequences this could have in foreign penitentiary systems. Despite a large body of literature documenting the scale of felony conviction and imprisonment in the U.S., and its effects on inequality outcomes, we know relatively little about the impact of the U.S. model in Latin American prisons. After the reform took place, almost every country that introduced it experienced an acceleration in the incarceration rate. Almost three decades after the first legal transplant, Latin America lives one of its majors’ prison crisis, while the effect of the adversarial model in the carceral outcomes remain empirically unexplored. In this project, I seek to advance the literature regarding the consequences of the U.S. transnational agenda by analyzing how the implementation of the U.S. model in one key jurisdiction -Colombia- resulted in changes to the convicted prison population. Particularly, I will explore the effects of introducing highly problematize institutions like the plea bargaining into the Latin American context. To carry out this analysis, I exploit the variation resulting from the different timing of the implementation of the Colombian reform across its territory to evaluate how the U.S. criminal justice approach changed the incarceration dynamics and whether the new system increased the convicted prison population growth. 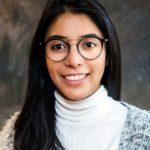 Ángela Zorro-Medina is a Neubauer Distinguished Doctoral Fellow at the University of Chicago and a doctoral student in Sociology. Her research focuses on the ways the criminal justice system produces and reproduces inequality in Latin America and the United States. For the Latin American case, she studies the factors that influence the prison population and crime rates. For the U.S. case, she is interested in understanding the mechanism through which misdemeanor encounters reproduce class and racial stratification. Before coming to the University of Chicago, she was a Fox International Fellow at Sciences Po in Paris, France. She previously served as a consultant to the Colombian Ministry of Justice, the Inter-American Bank of Development, and the German Corporation for International Cooperation (GIZ) in projects related to prison conditions, criminal procedures, and economic development.