Equality out of Empire: The Human Sciences and Self-determination in the Twentieth Century

My dissertation is an intellectual history of how different ideas about human equality— that despite the exterior differences of race, caste, and ethnicity, all individuals are fundamentally similar and equal—came to be conceived, constrained, and institutionalized in debates about decolonization and expectations of a more equitable world after empire. I analyze these shifts within certain ‘problem-spaces,’ conjunctural and discursive contexts in which propositions, arguments, and resolutions arise to respond to largely implicit but urgent questions and problems. Drawing on the history of psychology and population genetics, anticolonial political thought, and Human Rights, my dissertation addresses the following questions: What did the diplomatic and scientific institutionalization of human equality mean for those who had suffered the most from racially hierarchical colonial rule? Was this the final victory their struggles against colonialism had aspired to? If not, what was missing from this concept that lent crucial support for the wave of decolonization in the 1960s which restored independence and legally recognized sovereignty to formerly colonized populations? With chapters situated in colonial India, British East Africa, and the UNESCO secretariat in Paris, my dissertation offers a rich intellectual history of decolonization, post-colonial international relations in the twentieth century. 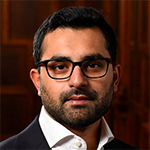 Muhammad Usama Rafi is a PhD candidate in the Department of History, working on intellectual and international history. His research focuses on the history of equality, redistributive politics, and self-determination in Asia and Africa during the twentieth century. Usama received a BA in political economy in Lahore, Pakistan and previously worked as an international development consultant on public legal reforms in Pakistan. His previous research has been generously supported by the Nicholson Center for British Studies, the Pozen Family Center for Human Rights, and the Division of the Social Sciences. Usama is currently the co-coordinator of the inaugural History and Social Sciences Forum and a member of the Student Executive Committee in the Social Sciences Division.