This project focuses on the continuity between colonial and national ways of organizing local judicial institutions and conceiving judicial power in Hispanic America between the end of the eighteenth and the first decades of the nineteenth-century. It emphasizes the stability and normal functioning of trial courts and equivalent institutions at the time in order to both qualify common perceptions of the period as one of anarchy or constant political experimentation and, in addition, inquire how these institutional continuities produced regional or national order from the bottom-up. The hypothesis is that the persistence of judicial structures –procedural, organic and in the person serving as judge– was a stabilizing factor that contributed to state formation and the existence of a national narrative, prominent features in Hispanic-American countries during the second-half of the nineteenth-century. As a test case I intend to draw a comparison between the functioning of local judicial institutions in Mexico City and Oaxaca, mapping the different ways in which they contributed to the creation of regional orders and in which they were impacted by constitutional changes. The results may recommend broadening the research to cover other Mexican regions or even localities outside of Mexico. 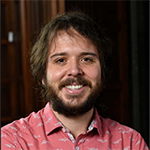 Juan Wilson was born in Santiago, Chile, in 1988, were he studied both law (J.D.) and a M.A. in History at Universidad de Chile. Before coming to the University of Chicago in 2018 to pursue a Ph.D. in History, he worked as a clerk for Chile’s former Supreme Court Judge Enrique Barros and later became Instructor Professor of Legal History and Civil Law in Universidad Adolfo Ibáñez (Chile). His main research interests are Latin American Legal History, the relationship between legal and historical discourse and the role of law in the process of state formation in Latin America.