Barbarians on the Shore: Negotiating Global Trade and Daily Life on the South China Coast, 1770-1853

Most scholars have painted a bleak portrait of the early modern encounter between “China” and “the West,” with stories of cross-cultural misunderstanding, legal disputes, and opium smuggling taking the fore in a conflict-centered narrative of the decades preceding the first Opium War (1839-1842). My project, however, takes a different approach. Through a multidisciplinary, bottom-up reexamination of the daily lives and incentives of Chinese, Europeans, and Americans on the South China Coast in the years before and after the first Opium War, I suggest that everyday conflict and misunderstanding were in fact far less typical than many believe. My research leverages legal archives, economic records, and linguistic data to show how problem solving and cooperation, not conflict, were actually the norm: driven by practical and economic incentives, most local Chinese worked flexibly with their foreign counterparts to resolve the majority of problems on the ground level, long before they wended their way up to the legal or political spheres. By highlighting these processes of negotiation and relationship building, I aim not only to substantially revise how we understand the trajectory of Sino-Western relations in China’s late imperial period but also to arrive at a more sensitive understanding of how people from different places, holding dramatically different worldviews, could make sense of and engage with one another in their daily lives. 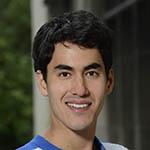 Carl Kubler is a fourth-year Ph.D. Candidate in the Department of History who studies the social and economic history of late imperial and modern China. His current project, “Barbarians on the Shore: Negotiating Global Trade and Daily Life on the South China Coast, 1770-1853,” provides a bottom-up reexamination of Chinese-foreigner relations from the late eighteenth to the mid-nineteenth century. His research interests include the history of Sino-Western contact, global maritime history, intercultural communication and conflict, language and identity, education, and the history of children, childhood, and nationalism.