Land Use Change and Infectious Disease in the British Empire, 1840-1914

Drawing on historical and epidemiological methods, this interdisciplinary project examines disease outbreaks in three distinct cities within the nineteenth-century British Empire – Bombay, Melbourne, and Belfast – to argue that the diseases that emerged in these spaces are the direct result of their ecological and colonial contexts. These contexts, I argue, were shaped in part by British colonial administrators and city planners, who imposed a distinct and uniform ideology of environmental management, characterized by densely populated urban centers, stagnated and rerouted water systems, and the introduction of new animal life. Drawing on primary source documents related to these disease outbreaks, medical texts, and modern scientific theories, this project asserts that British actions in the empire created more complex environmental dynamics in which microbes – sometimes endemic, sometimes imported – were able to thrive, at the expense of the humans whose actions enabled their success. By approaching environmental transformations from a microbial perspective, therefore, this project asserts that ecosystems can be complex, fluid, and resilient in ways that are unexpected to the humans who alter them and act within them. In their attempt to “improve” landscapes by engineering climates and ecosystems, the British destabilized them, and created a new series of challenges to health, livelihood, and the imperial project as a whole. 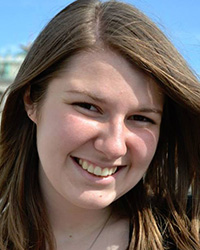 Emily Webster is a third-year PhD Candidate in the Department of History, studying the Environmental History of the British Empire. Her current project, "Diseased Landscapes: Land Use Change and Emerging Epidemics in the British Empire, 1840-1915," focuses on the relationship between urban land use change and the emergence of epidemic diseases in British colonial contexts. Her historical interests include disease, environment, urban structure, empire, and the Anthropocene.