From the 1830s onwards, metropolitan and native reformers increasingly took issue with India’s position as an anomalous, hermetically sealed space distinct from the British Empire proper. They concluded that British rule remained unprincipled and under-scrutinized, as agents throughout the colonial administration executed arbitrary decrees with scant oversight or concern for Indians’ subject rights. To address these failings, the primary reform organizations and actors articulated an enduring program of trusteeship premised on the conservation of native political institutions ranging from municipal village governments to enormous princely states. India, the reformers stressed, possessed the seeds for its own material development. All it required was integration into global capital flows through investment in public works and cash crop agriculture.

By examining these reform networks’ modes of organization and rhetoric, my study addresses a series of questions that concern the inner workings of imperial sovereignty. Could non-official actors challenge despotic policymaking if institutional modes of redress were lacking or non-existent? How did outsiders acquire sufficient legitimacy to stage an efficacious agitation? In other words, if a regime was unwilling to police itself or render its actions transparent, was there any hope for a reconstitution of exploitative imperial rule as a moralized form of governance? 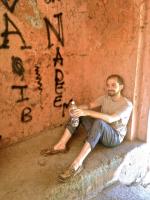 Zak Leonard is a PhD candidate in the history department at the University of Chicago, specializing in modern South Asia, Britain, and empire. Prior to coming to Chicago, he received a MSc from Edinburgh University and a BA from Brown University. His published research includes an article for the Historical Journal detailing methodological shifts in colonial ethnography on India’s North-West Frontier following the advent of sociocultural evolutionism. He has also contributed a book chapter to a forthcoming collected volume that reassesses the career of Scottish scholar-administrator Mountstuart Elphinstone. This piece suggests that colonial ethnographers and metropolitan reformers invoked Muslim “fanaticism” as a polemical device to substantiate divergent theories of native political development. His present dissertation project analyzes the activity of Victorian India reform organizations that challenged “anomalous” modes of colonial rule. Chapters examine pressure group competition and link-ups, forms of imperial constitutionalism, the utilization of law of nations theory and international law in the defense of princely sovereignty, and the reformers’ alternative conceptualizations of colonial political economy.  In addition to his research, Zak has taught lecture courses, supervised BA thesis projects, and co-organized a recent conference on colonial frontiers and borderlands.