Finding the right balance between the revolutionary power of the passionate masses on the one hand and the efficiency of centrally organized structures on the other has often proved problematic for revolutionary leaders, especially in building revolutionary armies. Various cultural explanations have been offered to theorize how mentalities, habits, social networks, and ideological beliefs of volunteers can provide the required organizational structure in a grassroots fashion. Historical examinations demonstrate, however, that top-down processes of control have always been at work to guarantee military success. The Islamic Revolutionary Guards Corps (IRGC), a militia that emerged after the Iranian revolution of 1979, defied this pattern. To explain the successful prolongation of the revolutionary moment within the IRGC, I argue that the actors’ mostly subconscious capability to recognize each other’s cultural belonging should be considered, as it can lead to extreme organizational flexibility. I lay out the characteristics of this collective work style by studying the emergence of revolutionary institutions in general and the IRGC in particular.

I reconstruct the resilient networks that eventually shaped the IRGC in the first three years after the Iranian revolution (1979-82), based on in-depth interviews with Iranian military personnel, archival material, and published document collections and memoirs. I argue that clerics close to Ayatollah Khomeini and their Shi’a followers formed fluidly connected communities by recognizing individual volunteers’ cultural belonging. Reliance on elastically strong ties allowed leaders to act against collective decisions as contingencies necessitated, grassroots clusters could be trusted and granted authority, and consequential decisions could be made informally to avoid organizational accountability to rival institutions. The resulting organizational flexibility was appealing to volunteers as their desire for revolutionary direct action was fulfilled within such organizations—a feature that proved critical for the IRGC’s successful institutionalization in post-revolutionary armed conflicts. 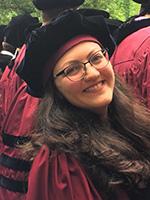 Maryam Alemzadeh is a junior research fellow at the Crown Center for Middle East Studies at Brandeis University. Alemzadeh graduated from the University of Chicago Sociology Department in 2018. My research focuses on post-revolutionary institution building and the role of culture in the success of grassroots organizations. In her book project, Maryam studies the formation of the Islamic Revolutionary Guards Corps after the Iranian revolution of 1979. Her future research will be a comparative study of how different lived experiences of religion can lead to different organizational styles among grassroots Islamic militias across the Middle East.

Alemzadeh’s dissertation was supported by the Mellon/ACLS Dissertation Completion Fellowship.